Well, I'm back again trying to get one out toward the end of the month. I've been busy with other projects that will be posted later. However, yesterday was Doctor Who day and I happened to listen to the Big Finish Audio The Wrong Doctors after Journey to the Centre of the Tardis. After careful consideration, I feel the new series could learn a thing or a ton from the audio series and old episodes in general. Not that I absolutely dislike the new series, but the story quality has been so consistently mediocre that it is annoying. Yesterday's new series episode The Journey to the Centre of the Tardis has crossing time streams and alternate futures that all felt so overdone, wasteful and boring. Not to mention the side characters and their tacked on ending and redundant message (Don't be a dick boys and girls!). This audio, by contrast, really knows how to tug at the heartstrings and most of all write characters, which aside from the Doctor and his Companion the new series doesn't seem to like to do. 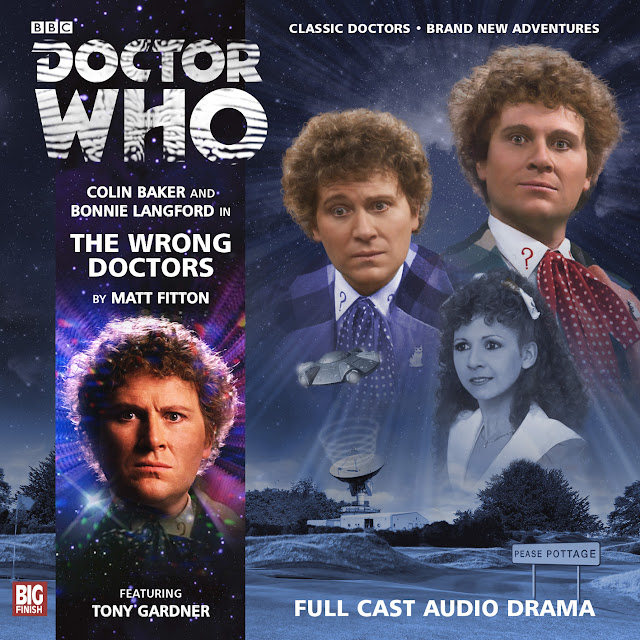 The Wrong Doctors By: Matt Fitton

Impressions
The Sixth Doctor has just finished his last piece of cake made by Evelyn Smythe and has begun feeling the strain of travelling alone. He decides it's time to head onward to meet Melanie Bush, his past and future companion. However, a past version of the Sixth Doctor who has just faced his trial has decided to drop that version of Melanie off. Unfortunately, they end up in in the wrong place and realize that neither is the Sixth Doctor who should be along to pick up Melanie, nor is everything as it seems.

This is a great episode though it require knowledge of a few specific points of the Doctor's and Mel's history to really understand. Even knowing those, it got a tad hard to follow at points though it is a space/time shift story. Despite this, the characters are quite well detailed. Even the lesser character managed to get some great lines and backstory. This is definitely superior to Fitton's earlier Black and White, so I hope to hear more good things from him!

Our Heroes
The Sixth Doctor aka Indigo Jones, is an older version of the Sixth Doctor weary after losing his latest companion and tempted by the possibilities in his future. Indigo must not only defeat the villain and fix everything, but he must also struggle with the idea that he can't save both Mels.

The Sixth Doctor, who I'll refer to as Rainbow, is a younger Sixth Doctor fresh off his trial by the timelords. Rainbow is the hotheaded brash and arrogant Sixth Doctor from the series. His contrast to Indigo is fantastic, though they get surprisingly little time together. His story is a little simpler, but it was nice to see him get knowcked down a peg by himself(Indigo)!

Mel Bush is a human computer programmer who enjoys fitness. I wasn't a big fan of her in the series, but (like the Sixth Doctor) she is absolutely stunning in the audios. This Mel must deal with both Sixes (neither of which is her Six as well as her younger self.

Mirrored Observer
Mini Mel is a younger version of Mel. She's not quite all there and seems to be a nearly useless ditz at first. She seeks to prove herself to the strange Doctors and her older self. The fact that this tale manages to make such a pathetic character so interesting is a testament to the love and craft that went into this.

Foes Out of Time
Mr. Petherbridge and company have all been plucked out of time and seem fine with it. In fact, they all know when and how they were supposed to die. Petherbridge himself is a marvelously understated villain. He waits until the Doctor has already discovered his plan before seriously revealing any of it. I'd love to see him or his ilk return in future episodes.

Patchwork Atmosphere
I think the roughest spot in this is some of the movements between different parts of time. It could get a bit confusing, though it was fine most of the time.

In the End
A touching and sobering ending to this twisty tale. I'm not sure it all made sense, but it was certainly enjoyable.

Overall
Leave it to the Sixth Doctor to be not only The One Doctor, but both of the Wrong Doctors. This is a tale that should not be missed by any fan of the Sixth Doctor. While it may not be too friendly toward new fans, I'd actually say it's worth watching Trial of a Time Lord and a few other Doctor Who audios and then checking this one out. The unification of old and new is the highlight of this audio and something the new series could use a lot more of.
8/10
Buy it here from Big Finish!
By: Daimeon at 21:25 No comments: